The Seasoning of Fairies

In many areas of South China, when referring to taste of the mountain demon berries, mujiangzi, people’s opinions are widely divided. Those who like them are crazy about their taste, while others despise the taste and cannot even stand their smell. 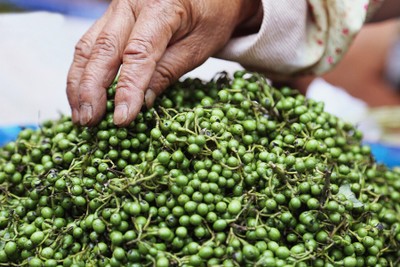 Mujiangzi is a seasonal vegetable, which grows on the mountains in Wulong. In places where humidity is high, mujiangzi can be harvested year-round. Mujiangzi is a key food for the people of Wulong.

The period of time in which mujiangzi can be harvested here is short, and fresh mujiangzi spoils quickly losing its essential oils. Therefore, flavor is compromised when the food is dried. Thus, mujiangzi can only be found in towns which are nearby mountains and forests. It is difficult to transport this product to the city quickly enough for it to be consumed while fresh. Consequently, it has remained a treasure exclusive to those living in the mountainous countryside.

Attempting to find a way to preserve the flavor of mujiangzi, we visited a man named Mr. Zhao Benxiao. He is well known for using the most primitive method of distillation, which extends the shelf-life of mujiangzi.

When we came to Mr. Zhao’s “production workshop”, we saw earthen stoves and a lot of iron. He told us that first, he adds four or five hundred pounds of wood to the stove and then distills about one hundred pounds of raw seeds for ten hours. Ultimately, this process produces a mere one and a half pounds of mujiangzi oil.

Mr. Zhao’s method is primitive and laborious, and more so, it’s costly! However, this is truly the most effective way to preserve the flavor of mujiangzi.

Today, mujiangzi oil has become a must-have ingredient for many of the local dishes of Wulong. The mujiangzi oil, which is rich in lemon flavor and slightly numbing, is added before the dish is boiled, imparting a rich flavor to the food.

Wulong, with the spice of Mujiangzi floating in the air, is an unforgettable must-go place.

My Memories of Wulong’s Celebration of Spring Festival

Spring Festival memories are different for everyone. When I think of the Spring Festival celebrations of my childhood, I remember my whole family sitting together, the entire table full of fruits and drinks. New Year’s Eve brought back memories of the sounds of firecrackers going off.
For Wulong people, dim sum was their special Spring Festival food. 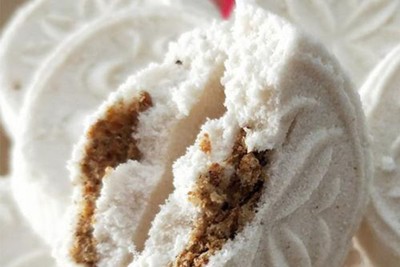 Making dim sum is a skill of the Wulong Tujia minority that was passed down from their ancestors. This process is very complex. My mother told me the steps include choosing sticky rice, soaked rice, fried rice, grind rice, add sugar, press the dim sum, braise the dim sum and package the finished product. This is traditional Chinese dim sum, so it requires the cook to pay particular attention to the temperature, humidity and heat. There are also requirements for the storage of the finished products.
The shape of the dim sum can vary according to the shape of the mold. The molds can be in several different forms, such as flowers, birds, fish, or other figures. However, they have one thing in common and that is that they are all delicious.
Dim sum is the most popular food of the Tujia minority during the Spring Festival. However, it is also popular during other times of celebration, such as during weddings, as a housewarming gift, for birthdays, or any other holidays or special occasions. It is very popular with the people of the Tujia minority. 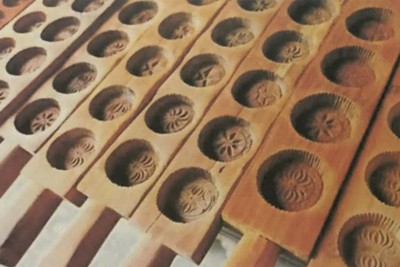 As I remember, every day in December consisted of busy parents and children anxiously awaiting the coming festival. During that time, my mom was the busiest person I’d ever seen. She would work all day, then every night the neighbor would invite her to help make dim sum. It was hard, tiring work, but she enjoyed it.
As time goes by, the economic conditions of the people improve and it becomes easier to satisfy their basic needs. For example, today one can go shopping in a supermarket or even online from the comfort of their own home. Changes like these have caused some aspects of the traditional Spring Festival celebration to disappear. 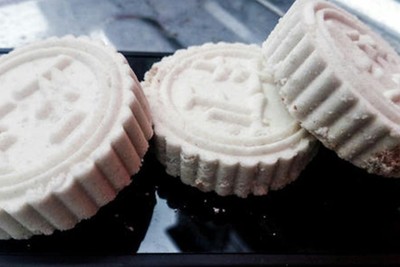 Nowadays, the Chinese New Year celebration consists of text messages from loved ones, red envelopes sent through WeChat, and celebration banquets at a hotel. This is the new Spring Festival. For the most part, the traditional celebration of the Spring Festival is a thing of the past, the only remnants being people playing Mahjong or drinking heavily with their family.
I thought again back to my childhood. The time of my mom making dim sum was gone. The only thing that was left were the unforgettable memories. I am thankful for those, and hopeful that I could make similar memories with my own children.

Wulong, the City of the Savory Spring Pudding

Unique food that is loved by the Wulong people

Wulong people are full of great cooking skills and can make a great dish even with only average ingredients. One example of this is the delectable Spring Pudding. Even normal soybeans can transform into delicious Spring Pudding with the culinary skill of someone from Wulong.
Spring Pudding plays an important role in the local diet and culture of Wulong. Throughout history, Wulong people ate Spring Pudding at such a rate that it became a cultural habit rather than just a feature food. 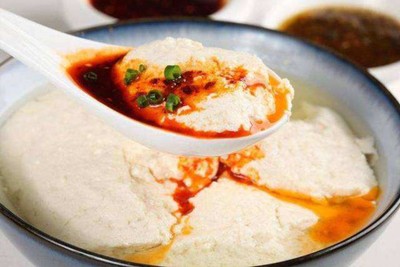 Even the preparation of a small bowl of “Spring Pudding” requires twelve steps from start to finish. The course of making the pudding is not complicated, but is a very detailed process. For best results, fresh spring water should be used in the preparation. If spring water is not available, the best alternative is well water. One thing to keep in mind is that you want to stay away from tap water, as it is not as clean or as fresh as the previously mentioned spring water or well water options. Another reason to aim for spring water is because well water or tap water would result in the Spring Pudding being not as fresh or tender as it would with the other types of water.
Before producing Spring Pudding, soybeans must be soaked in spring water. After they are thoroughly saturated, they must be ground with a stone mill. Immediately after this, pour the soybeans into the filter cloth and mix with previously prepared boiled water. The mixture of the boiled water and the soybeans will result in the creation of soy milk, which can then be used in the further creation of the Spring Pudding. 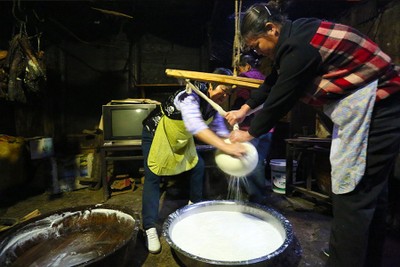 Next, pour the soy milk into a large pot, add two tablespoons of sugar, and boil. Trust me, it will be delicious.
After the soy milk has boiled, it becomes an important element in the next phase, which is making the “Spring Pudding” key process—Dian（Slowly pour Lushui）. In simple terms, you add some special Chinese Lushui( A sauce made with Alkaline water) into the pot and slowly stir to mix it with the other ingredients. The quantity and balance of the “Lushui” will determine the quality of the Spring Pudding, and the “Dian” is the most important part of the entire process.
When you are pouring Lushui, you can see the white soy milk turn slightly yellow. At the same time, you will see the real-time formation of the “Spring Pudding”. The “Dian” process is finished when the water becomes clear with a bit of a yellow tint.
After making the “Dian”, the last thing to do is to press. This helps to form the tofu even more. Once this is done, all processes in the making of the “spring pudding” will be finished. 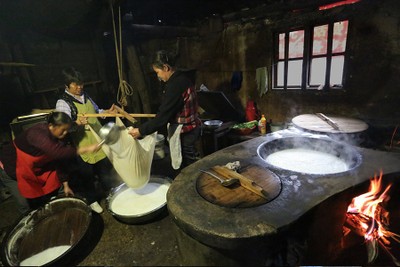 Even with good quality  Spring Pudding, people often use delicious sauces because sauces improve the taste. This isn’t to say that the “Spring Pudding” isn’t god without the sauces, believe me, it is. However, the sauces make it even more delicious. For Wulong people, the main materials of the sauces they use are chili, garlic, and pepper. All you have to do is slice all of the sauce ingredients, put them in a bowl, and then mix the oil and boiling water with said ingredients. Finally, add salt, vinegar and sesame oil, and you’re done.
This dish is irresistible to Wulong people, not only because of its delicious taste, but also because of the pride it brings out in the people. With it being an original Wulong dish, it’s something they take great honor in, and they are happy to share it with any visitors who may pass through the town.